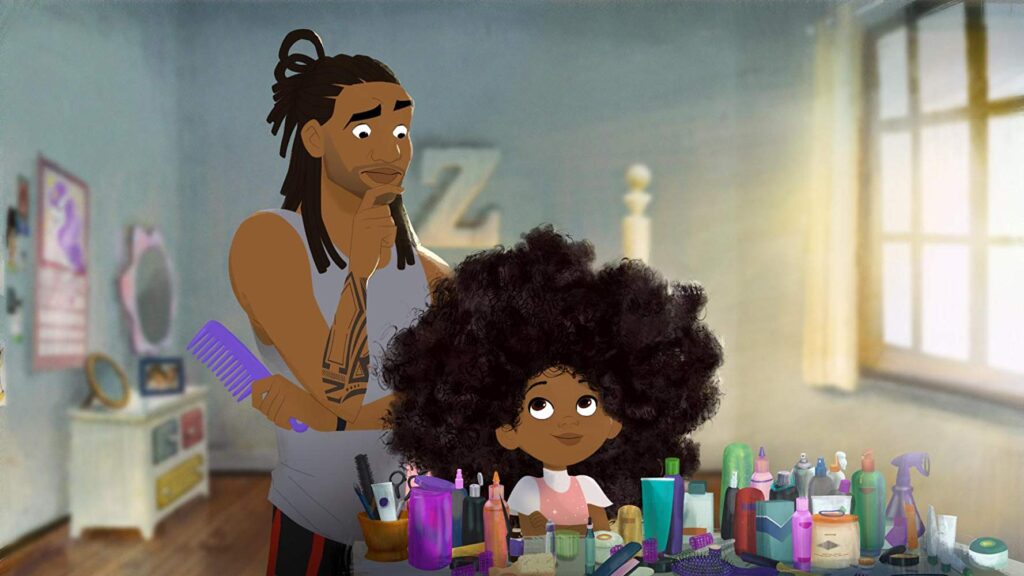 Former Ravens NFL Linebacker player Matthew Cherry grew frustrated with the way Black hair was portrayed in the media and so he came up with an idea for an animated short about a man struggling to do his daughter’s hair when mom (voiced by Issa Rae) is away sick at the hospital. It’s endearing and has a sweet message or two and ending, I won’t ruin for you.

Cherry, who was cut by his NFL team in 2006,  but bounced back to conceptualize the short, then, in 2016, he asked his Twitter following if any of them were digital animators.

“Any 3D artists follow me? I got an Oscar worthy short film idea to go with this image. Get at me,” he tweeted

A year later, he and his team launched a kickstarter to fund the dream.

Four years later, the project, “Hair Love” was nominated and won the Academy Award for Best Animated Film (Short), an entire year after the late Kobe Bryant won it for his short “Dear Basketball.”

“The story of a dad struggling to do his daughter’s hair not only charmed those who saw it, but resulted in a children’s book and plenty of conversations about the importance of hair and heritage in the black community,” writes entertainment writer Lisa Respers France in CNN.

What makes this story even more awesome was the fact that Cherry and his fellow creators and producers of the short invite Deandre Arnold, the Texas teen who was told to cut his dreadlocks or he couldn’t attend graduation, to the Oscars.

What makes this story even more more amazing is that in 2012, Cherry tweeted that he would one day be nominated for an Oscar!

Talk about speaking things into existence!!

I'm gonna be nominated for an Oscar one day. Already claiming it

After the win, writer and actress Dani Fernandez reminded fans that the people helped bring it to life when the Hollywood studios didn’t deem it important enough

As @VictoriaMahoney reminded everyone, Hair Love had to do crowdsourced funding on Kickstarter in order to be made, because conventional studios and execs didn’t believe in it’s importance.

It was funded by yall.
And I hope all these studios are listening now.